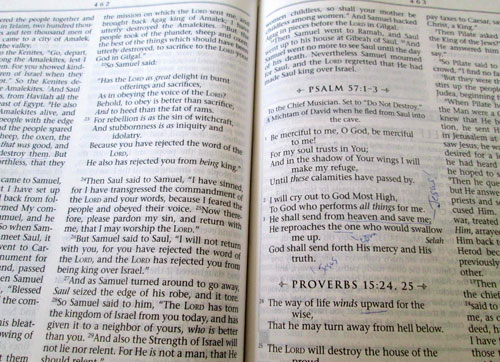 The Lord through Samuel instructed Saul to attack the Amalekites, to utterly destroy them, to not spare them. Saul went after and defeated the people, as God had commanded him to do; however, he only obeyed partially. He captured their king alive and kept the best of the livestock. Saul and the people kept everything that they determined as ‘good‘. Though he knew what the Lord had told him to do (He was pretty specific), Saul did what he thought best in the situation, not what God told him to do in that situation.

How many times do we belittle the voice of God? We try to justify our behavior and we think or we tell ourselves that we did what is right because we kept part of the Lord’s command. Partial obedience is still disobedience, as we learned from Saul.

“Has the LORD as great delight in burnt offerings and sacrifices, as in obeying the voice of the LORD ? Behold, to obey is better than sacrifice, and to listen than the fat of rams. 23 For rebellion is as the sin of divination, and presumption is as iniquity and idolatry. Because you have rejected the word of the LORD, he has also rejected you from being king.”

To obey and to listen is better in the Lord’s eyes than anything we might deem as “good“. We may even think we are doing it for the Lord, but if it is outside of what He has told us to do, it is rebellion. It is sin. It is as Jesus said in Matt 7:21-23,

This is what Saul did. He went to battle and kept what he considered ‘good’ from the spoils of that battle, and said he did it in the Lord’s name. He returned and said “Look what I did for the Lord! Look at me, how obedient I am!”

How many times do we do something we think is good and say that it is for the Lord when, in actuality, it is not in obedience to His Word? I am challenged to walk more obediently, more fully with the Lord, in reliance upon the Holy Spirit. For His ways are not our ways, and His thoughts are not our thoughts.

1 Be merciful to me, O God, be merciful to me, for in you my soul takes refuge; in the shadow of your wings I will take refuge, till the storms of destruction pass by. 2 I cry out to God Most High, to God who fulfills his purpose for me. 3 He will send from heaven and save me; he will put to shame him who tramples on me. [Selah] God will send out his steadfast love and his faithfulness!

When I need refuge, when I need help and encouragement in hard times, when I need to be uplifted, I can call out to God Most High. He not only has a purpose for me (We all need to know we have purpose!), but He also fulfills that purpose!
“He (God) will send from heaven and save me…” He sent His Son Jesus from heaven to save me!
“he will put to shame him who tramples on me.” Satan is the trampler, and Jesus has defeated him!

He will and he has sent out His steadfast (unchanging) love and his faithfulness!