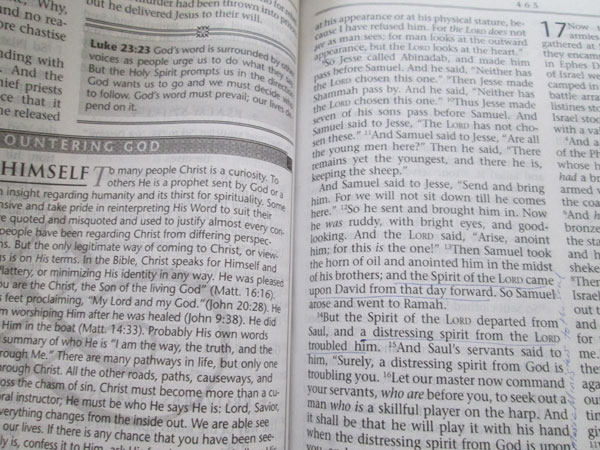 The reading in I Samuel today tells the stories of the anointing of David and David’s defeat of Goliath. I won’t retell the stories, but will share some thoughts and highlights from the passages, or, you might call it my ‘take-aways’ from this reading.

The first thing that struck me was I Sam 16:7 when Samuel was with Jesse’s sons and seeking the one the Lord appointed as king of Israel. Earlier in the book Saul is described as the most handsome man in Israel and head-and-shoulders above the rest. The Lord then told Samuel that He will appoint another king, and this time a man after his own heart.

In chapter 17, we see the Spirit working through David. We see his great faithfulness in the living God, the Lord and Deliverer. He says to the Israelites regarding Goliath and the Philistines, “Who is he that he should defy the…living God?” And then, David, the little shepherd boy, volunteers to step up to 9-foot tall Goliath face-to-face with a great faith that God would be the victor in this battle. He said, “The LORD who delivered me from the paw of the lion and from the paw of the bear will deliver me from the hand of this Philistine.” (I Sam. 17:37) He boldly spoke to his enemy and told Goliath in whose authority he came.  Towards the end of this speech, David concluded with his ‘purpose clause’, stating why he is doing this: that all the earth may know that there is a God in Israel!

45 Then David said to the Philistine, “You come to me with a sword and with a spear and with a javelin, but I come to you in the name of the LORD of hosts, the God of the armies of Israel, whom you have defied. 46 This day the LORD will deliver you into my hand, and I will strike you down and cut off your head. And I will give the dead bodies of the host of the Philistines this day to the birds of the air and to the wild beasts of the earth, that all the earth may know that there is a God in Israel, 47 and that all this assembly may know that the LORD saves not with sword and spear. For the battle is the LORD ‘s, and he will give you into our hand.”

I am awed and struck by David’s great faith in God to be the victor of his enemies, to deliver His children, to love and provide for them. David stood up in faith, in the name of the Lord so that that all the earth may know that there is a God! We need to do that same. We need to be willing to be used by God and have faith that He will deliver. He will provide, protect, and care for His children. He can use even the ones the world looks down on, the ones that aren’t ‘gifted’ in the eyes of others, God can and will use if they have faith in Him.

Stand up in faith so that that all the earth may know that there is a God!

5 Be exalted, O God, above the heavens! Let your glory be over all the earth!

9 I will give thanks to you, O Lord, among the peoples; I will sing praises to you among the nations. 10 For your steadfast love is great to the heavens, your faithfulness to the clouds.

11 Be exalted, O God, above the heavens! Let your glory be over all the earth!

In the midst of his trials, while he was fleeing from Saul, David’s heart still worshiped and gave thanks to God. We see again David’s faith and his heart that all the earth will know that there is a God; for he will sing praises to God among the nations. He desires God’s glory to be over all the earth.

That is my desire to: that He be glorified over all the earth, to sing His praises among the nations!